Interview with This Side Up

It’s a over a month since the Electric Picnic and we’ve all had time to look back and reflect on what we saw and did over that amazing weekend. Some of it was good, some of it was bad, but some of it was just great. This Side Up, hip hop merchants from Sligo, fall in to the latter.

I must admit, I was a bit wary when I was told that these rappers from Sligo were a “must see” act for the weekend. Irish Rap, well… Rap / Hip Hop is not something you would associate with Ireland. I can’t imagine that there are many rap battles in Sligo, so how did you guys hook up?
Myster E: Myself and Shaool did a battle of the bands for the craic back in secondary school. We tested the waters in front of a school full of young fellas. We got a few gigs from that and recorded a terrible demo with some ‘big shot’ producer in Dublin, hopefully it’ll never see the light of day. Noone was making beats and DJing around town and he caught wind of us. He invited us over to record some stuff in his house. After much messing about and many cans we strung a few tracks together. Our first gig together was opening up for Messiah J and the Expert in McGarrigles pub . A while later Noone and another Sligo DJ PC started running nights in town called ‘This Side Up’. Myself and Shaool would get up with Noone and perform a few tracks each night and a set grew over time. 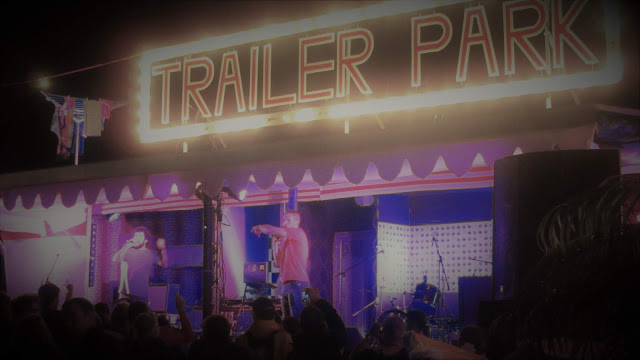 We recently interviewed King Kong Company, another band who blew us away at the Electric Picnic, they had a ball there this year. You guys had the crowd going mental over at the Trailer Park and managed to have the only stage invasion I saw all weekend! Were you happy with your performance and reaction of the crowd?
Shaool: We were delighted with the reaction. We like to keep it Rowdy and Electric Picnic is the perfect stomping ground. There’s a few heads who come to a lot of our gigs and they’re a lively bunch. I think people enjoy stumbling across us as well and being caught by surprise. It was our second year playing there; on that note big shout out to Hugo and everyone at the Trailer Park, it was a savage stage. It’s great to get in with an artist pass because we’ve been going to EP for years. I went to Electric Picnic’s first year to see Jurassic 5. It was the day after a school graduation. I remember arriving home early that morning, peeling off the suit and legging it for the bus to Stradbally. I haven’t looked back!

I’ve said it before, I’m a rocker at heart, but two albums helped secure my liking for rap. The first is Straight Outta Compton by NWA and the second Body Count by Body Count. The anger in both those albums is what drew me in. I couldn’t relate to stories being told, but the anger in those albums was a release valve of sorts for a fat white guy from Kildare! What drew you into the world of Hip Hop, what track do you remember hearing and thinking “that’s just fucking amazing”??
Noone: It’s hard to remember one particular track but I remember getting handed the adventures of Slick Rick on tape when I was a young fella and that really sparked my interest in Hip Hop.
Myster E: I got some Hip Hop albums from my cousins and got into it pretty quickly. I used to record Yo! MTV RAPS and one track that stands out is Protect Your Neck by the Wu Tang.
Shaool: My friend came over with an Arsonists album on tape. That got me into Hip Hop.

When you break it down, Rap is just poetry to a beat and god only knows, Ireland has some of the finest poets the world has ever produced. It’s surprising that there hasn’t been an Irish Hip Hop / Rap breakthrough artist on an international scale. OK, Maverick Sabre has had some success in the UK, but what do you think is holding back Irish Hip Hop? Are record companies just not interested in the scene here?
Noone: I don’t think anything is holding back Irish Hip Hop. The quality is constantly getting better and in time I think it will have a bigger impact. These days it’s all DIY so we’re not expecting a record label to come along and start throwing money at us.

You guys obviously work hard at your craft. You don’t develop an on stage presence like you have without doing that. You tour, you spend ages writing in the studio, basically breaking your balls for your art. How do you feel about X Factor, The Voice and other such TV Talents shows that create careers for some rather untalented contestants?
Shaool: Never paid them much heed. Each to their own! It would never work for us. There’s a great music scene in Sligo and I think that’s really helped us develop. We’ve been jamming with friends, going to gigs and playing gigs for a good while now. I think that’s what it’s about which is at odds with the instant fame idea presented by the reality TV shows.

So what does the future hold for This Side Up? Are there plans to get into the studio any time soon? Perhaps a few live dates around the country?
Myster E: We’re focusing on new material at the moment and there’s an EP on the way!

We might as well wind it down here with a few light hearted questions…
What’s the worst lyric you have ever written?
Shaool: Nothing but pure genius since day one!
What’s the worst preconceived misconception about Hip Hop?
Noone: It’s all pimps, hoes and slamming Cadillac doors.

Eazy E, Tupac, MCA, ODB or Notorious BIG… Which one would you bring back from the dead and why?
Shaool: Bring back ODB. We’ll get him over to Sligo for a gig. That’d be a laugh.

There you have it folks, This Side Up, the future of Irish Hip Hop.  The guys are currently finishing editing of a video from their Electric Picnic performance and as soon as it is done, we will have it hear on CHUNK.ie.