So, there I was, wandering around the Electric Picnic wondering who I was going to watch next. One of the lads said he had heard good things about King Kong Company and that we should check them out, so off we headed to the Body and Soul Arena to do just that.  As I mentioned in my review of the Electric Picnic, the gig was epic.  I figured we just had to interview them here on CHUNK.ie, and here it is!

First things first, congratulations on a storming gig at the Electric Picnic. It completely blew me away.  Was this your first Picnic experience?
We’ve been to many Electric Picnics over the years but just as punters, and it’s always been a great festival, so it was a fantastic experience to play at its 10 year anniversary. 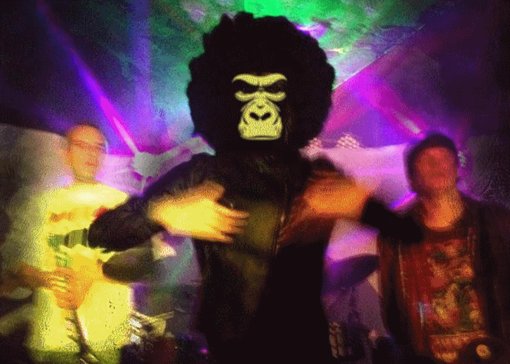 King Kong Company is a rather interesting name for a band, where or how did you come up with it?
The name is taken from the film Taxi Driver. If you look closely, Travis Bickle is wearing a badge which says King Kong Company. Mark our Bass player also DJ’s under the name Travis Bickle.

For those unlucky enough not to have seen you at the Electric Picnic, can tell us a little about the band, where you guys come from, how you all met and who is who.
Although we come from all over the country we all live (or lived) in Waterford. Mark White (Bass), Alan Aylward (guitar), Mark Graham (Drums), Colin hoye (Trumpet and Keyboards) and myself Tom Stapleton (Keyboards) all got together in 1996 as King Kong Company. We played Homelands, the Red Box (if you remember it) and a lot of Irish venues but then we stopped around 2000 until boredom set in around 2010 and we decided to get back together. Initially we got back just to release one new music video each month, which we did for a year. After that we said we’d try one gig and that was at The Forum in Waterford. 600 people showed up to it so we said we’d try a few more. We’ve been really lucky with the gigs, we’ve done about a dozen since getting back together and they’ve all been great and deadly slots - after Beardyman at Indiependence, closing Knockanstockan and playing late night at The Twisted Pepper. Since we got back together we’ve added some new members too - Trish Murphy, who is our dancer, and Sue O’Neill who does vocals. They’ve also reduced our average age by a few years ;)

I was trying to explain to some friends what you guys sounded like, but failed miserably.  How do you guys class yourselves or do you even bother?
No to be honest we don’t try to categorise ourselves

Is the live act the same as the studio act? In other words, does you drummer get replaced by a machine in the studio? Just while I’m at it, your drummer must have been wrecked after your gig at the Electric Picnic, I don’t know how he managed to keep rhythm at the speed he was playing!
We feed him lots of vitamins and secret potions to keep him going. We don’t think a machine could ever replace the real thing.

You have a rather special member, a female I think, who out does Bez in the onstage dancing stakes. Where did the idea for her role come from and what’s with the various different masks she wears? Is she shy??
Trish does all of the choreography for our videos and she’s in a few of them as well. She’s probably most recognisable from I Said Posse! but she’s the main star of a few others like Uncle Trouble.

I must admit, the first time I saw you bring out the trumpets, I got worried.  I almost had you guys pegged for some form of experimental dance music act when that happened, thankfully I was wrong!  The trumpets seem to be an integral part of the live show, how did that happen?
People see instruments and they have certain expectations but Colin made the trumpets an essential part of the act from the very beginning.  For as long as we’ve known him he’s always loved blowing his horn whenever he can!

Who is the creative force behind the band? Is there just one, or is it a collective thing?  Following on from that, how do you go about creating a track from scratch? Does someone bring a hook or a melody to rehearsals and you develop it?
We tend to write the music as a group. We usually do it in a studio environment. Somebody will bring a melody or a vocal line or a simple groove and then we will develop it from there.  Lots of arguing and laughing at each other is done between the start and the finish of a track.

So how did you Electric Picnic go for you? Did you get to stay for the weekend and watch some of the acts?
Electric Picnic was great. Most of us were there for the weekend. Robert Plant was the highlight for a few of us, BRMC were great and La Galaxie never fail to impress. We’ve seen these guys a few times this year either playing before us or after us and always put on a great show. The Body and Soul arena was superb, some great bands we didn’t know before like VANN Music and Tieranniesaur. It was also great to see so many Waterford acts playing namely The Dead Heavies, Torann Drums, Katie Kim, Propellor Palms and Band of Clouds. It’s proof that there is a very healthy music scene in Waterford.

What’s next for King Kong Company? Can we look forward to some new releases soon?
We have started working on new tracks and we should have a couple out before Christmas. But don’t hold us to that, sometimes the tracks take longer than what we anticipate. Fingers crossed there’s new tracks before 2014.

A quick word on your videos… They are superb, who, no, how do you guys come up with the ideas for them??
We’re lucky in a way that not only do we have Trish working on the videos as choreographer (and star), but we also work closely with a very talented Waterford director called John Loftus. He directed almost all the videos and he won an award for the video to Acetate (Viewers  Choice IMTV Awards 2011). John also does all our visuals at the live shows. Like the tracks the ideas for videos come from all of us and they take a bit of discussing back and forth before deciding on a route to take. The first year was tough making one video every month, although it became very regimented towards the end - shoot one weekend, edit the next two and put it out the fourth weekend. When not shooting we were working on the next track/video while Luke (Abbott our marketing/manager guy) pushed the videos once they were out.

Finally, we will see King Kong Company on tour any time soon?
We’re doing one gig in Waterford on September 14th as part of a fundraiser. After this we have nothing confirmed/booked but hopefully we’ll return to Cork and Dublin before the end of the year. The best place to find our dates are on Facebook and Twitter
If people want to check out our videos they’re all on Youtube and a good few of our tracks can be downloaded from Soundcloud too.


And that dear reader, is that. Hopefully you guys like King Kong Company as much as we do! Oh and stay tuned for more interviews from performers at this years Electric Picnic!!