Over two nights in St Brigid’s Cathedral in Kildare town, we got to see some of the best that Irish music has to offer!

Organised by Paddy Casey and Sophia Cadogan, Firebirds was described as a two day music event, a mini indoor festival! 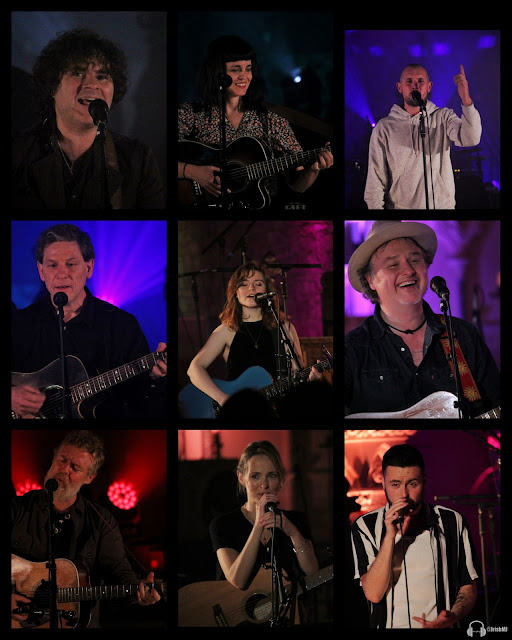 Tuesday night started with Grievous Boy.  I'm a fan of Irish Hip-Hop but I'd not heard of him before, It didn't matter, I enjoyed his set and hopefully I'll get to see more of him in the future.

Next up was Saoirse Casey complete with a string section.  It was, I think, her best live performance to date, simply beautiful.

What can I say about the next performer, Gemma Hayes.  She hadn't played live in many years, but you'd never know it.  She came, she played, she conquered.  I loved it!  I can't wait to see her play again!

Tuesday night closed out with Mundy.  I've lost count of how many times I've seen him play, but each time it's a crowd pleasing gig.  So many great songs!!!

Wednesday night kicked off with the legendary Glen Hansard.  I think the last time I saw him play was in the Masonic, San Francisco, back in 2015.  If you came to hear him perform old Frames songs, well then you'd be disappointed, but if you came to be wowed by his solo material, you left smiling!

Next up was Colin Scanlan, another artists new to me,  One of the best things about nights like these is getting to see artists you've not seen before.  It's a tough job to follow Glen Hansard, but it didn't seem to phase Colin!

I hadn't seen Lisa Loughrey play in over two years, so I was really looking forward to seeing her perform and I wasn't disappointed.  Wonder singer, fantastic songwriter, just magic!

Lethal Dialect is a bit of a legend in the Irish Hip-Hop scene.  His first performance being back in 2006 onstage at Eamon Dorans in Dublin.  Fast forward 15 years and here he is treating the audience to a masterclass.  I'm not sure that audience was his typical, but I think they enjoyed the change in style and were very appreciative.  Again, I'm looking forward to catching him again!

The night closed with the man behind the project, Paddy Casey.  Much like Mundy, I couldn't begin to tell you how many times I've seen Paddy perform, but it's always a great gig and Wednesday night was no different!  The crowd were singling along to every song and doing lots of (covid restricted) chair dancing, fantastic!

And that's it, the first ever Firebirds Music Event.  Will there be another one next year?  Who knows, but I really enjoyed this one.

Now for some photos: