You may have read our review of Groove Festival 2014 last week.  If so, you’ll remember I mentioned the fantastic Miss Kate.  If you haven’t read it, why not?!
Anyway, we caught up with Miss Kate not long after her performance and asked for an interview.  She was only too happy to agree and here it is!

First things first, congratulations on a great performance at the Groove Festival. It was a memorable performance for me, how was it for you?
Well thank you! I’m glad it was memorable for you cause it’s a performance I’ll never forget. As I said I was a festival virgin and you always remember your first time (whether you want to or not!) Luckily, in this instance, I want to. 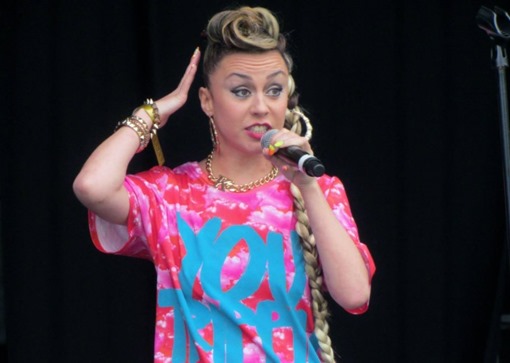 For those unlucky enough not to have seen you at the Groove Festival, can tell us a little about you, when you started in the business and what you’ve been up to?
I started writing songs and singing on a few house tracks when I was living in NYC after dropping out of college. I come from an acting family so I always knew I’d act- that was normal to me. But singing was always a fantasy to me. I was too shy to put my own words out to the world when I came back to Ireland, so I just continued to write and sing songs in my bedroom for years whilst making a career of speaking other people’s words– which I still love to this day by the way! Anyway, two years ago, it all finally became too much to hold in, so I grew a pair of balls and I recorded my first track YOU COME BACK with a producer mate of mine Jono Black and it all snowballed from there!
Once the plaster was off I did a few more tracks with Jono and then last year met the band and we released an EP together, and have been gigging in great venues all year. It’s all happened so fast I’m kinda like “why didn’t I do this years ago!?” but it wouldn’t have been the right time.

When I was writing my little piece on the festival , I tried to explain your sound, I think it’s a little bit soul, a little bit funk, a healthy dose of pop and lots of attitude. Almost as if Lisa Stansfield was fronting the Republic of Loose. Am I even close?
Wow! That sounds like a band I wanna hear! There’s definitely all those elements in there-but I’m still figuring my style out. I am influenced by so many different styles of music, its hard sometimes for me stick to one general area but when I’m with the band it’s always funky.  As long as a song has got soul in it and comes from a true place, I’m for it, regardless of genre.

Your sense of style is quite striking. Who or what influences it?
Likewise when it comes to fashion , I’m a chameleon. I love changing it up and being creative and fun with my clothes/hair/make-up. I’m influenced by music, art and my mood! One day I’m a Manga cartoon, the next I’m a teenage boy, but that night I might be Ru Paul! My style queen of a mother is a huge influence too. We love reading fashion mags together; I’m LIVING for Henry Holland at the moment– which is what I wore at Groove. I love his bright colours and bold prints.

How does the writing process work for you? Are the Higher State an integral part of the creation process or is it all Miss Kate?
It depends who I’m working with. Solo, I’ll often write lyrics and a melody and send them to a producer to write an instrumental to, or they might send me a sample I’ll respond to or vice versa and we both work then on production and arrangement. Or with the band, they will often jam something out and I’ll come up with a melody to go over it, it’s a very collaborative vibe with the band, however lyrically its all me. I’d find it very hard to write lyrics on command or sing someone else’s lyrics, I have to be inspired by something to write, it has to be authentic or else it just wont work.

A quick word about your videos. In short, they are superb, specifically Took the Life. Who’s the creative genius behind them?
Oh thank you! I was actually behind TOOK THE LIFE. I had done a live video of the song shot by Jamie Tanner in Henrietta St. with the band, but I also had my own original track that I wanted to do a video for. My first video YOU COME BACK was all the doing of the fab duo Martin Gaughan and Lisa Gallagher of like-minded productions. They came to me with the concept after Lisa played Martin the song in the office one day (she’s also my manager and friend as well as a producer) I was extremely lucky to have such a quality company make my first video, but I had no money for TOOK THE LIFE, so I came up with this concept and did up the graphics the night before, went over to Lisa’s and shot it on her iPhone with a projector, I was happy with the outcome thankfully and wanna do more DIY videos now.

What does the future hold for Miss Kate? Is there an album forthcoming or will you be touring for the foreseeable future?
I have some more performance dates coming up, the next one being Castlepalooza on the 1st of August, but yes at the moment I am working with different hip-hop producers on an album which will hopefully be ready before the end of the year. It will be very different to the last EP but I’m really excited about it.

We normally try to end our interviews with a few light-hearted questions, so…

Kanye West, bat-shit crazy or just a misunderstood genius?
Would have said genius up until BOUND 2, now I’m leaning more towards crazy…

For one night only, you can perform with any artist (dead or alive), who would it be and why?
OOOH…emmm…  Alive? “Badu Badu Badu”- cos when it comes to performance she is the Master Teacher.
Dead? “Amy Amy Amy” – no explanation needed!