I was in Dublin city centre this morning for the first time in 12 months.  The last time I was there was to see Jane Willow perform in the Cobblestone Pub on February 29th 2020.  I never, not for a moment, thought things would turn out as they did.  I was looking forward to a year full of gigs and excitement.  I think we all know how that turned out.

After doing what I had to workwise, I took a spin around Dublin before I headed home.  I drove by the aforementioned Cobblestone Pub, the Voodoo Lounge, The Grand Social, The Workmans Club, The Sugar Club and ended up outside Whelans. 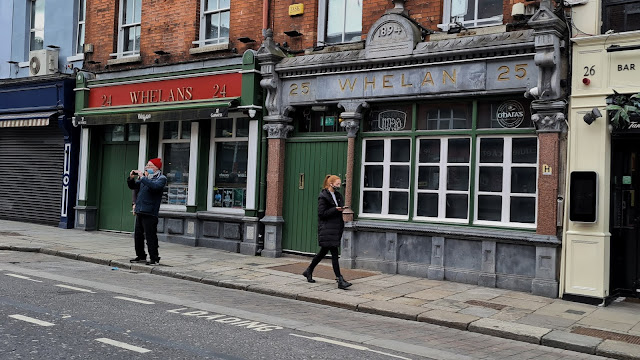 I've had great nights out in each of those venues and in many more around the country!  Dolans of Limerick, Crane Lane Theatre and Kino in Cork, Odd Mollies in Drogheda, the Moat Theatre in Naas, the Riverbank Arts Centre in Newbridge, the Solstice Arts Centre in Navan, Visual in Carlow...  The list goes on and on.

2017 and Helmet played Whelans.  There I am partying with them after the show.  I've the photos, I know it happened!  2018 and I'm having a post gig drink with Steve Wickham in the Solstice Arts Centre.  2018 again and I'm with the Mindriot folk at Bear in the Woods.  2019 and I'm hanging out with the Stunning and the Frank and Walters at The Playing Fields in Clane.  I even spent New Years Eve 2018 in Whelans with a great friend watching Mik Pyro play a blinder!  We were the last punters to leave that night...

Those aren't me name dropping, they're just examples of the crazy stuff that can happen when you go to a gig here.  Stuff happens, memories are made!

Every time I think of a good night out, I think of these places.  Every single time.  Even if I headed to a gig on my own, was I ever really alone?  There was always someone there in the crowd I knew.

So, where was I going with this?  Well, like many others, I miss these places, I miss these nights out with old friends, new friends or even alone.  I miss the live music.  Part of me is missing, a very important part of me.  It's a hole I don't know how to fill with anything else.  Again, like many others out there, these gigs are my happy place, a place where I can forget all the stresses and worries of everyday life, even if it is just for the night.

So yeah, I took a mini tour around some of these spots today and enjoyed the memories they brought back.  I'm hopeful that later this year we will get to see live music again and that we get to make new memories and new friends once more.

The chances that any of those venues and their staff will read this post are slim, but you guys are more important than you probably realise.  You keep me and many other people going, you keep our heads straight and we love you for that.

Until the next gig, stay safe!