Interview with Me First and the Gimme Gimmes

It’s not often you get the chance to interview your favourite bands, but thanks to CHUNK.ie and having a brass neck, I’m working my way through the list!
I’ve been a fan of Me First and the Gimme Gimmes since… well for more years than I care to remember.  One of the guys I worked with walked into the office with Have a Ball and it was the start of a sixteen year love affair with the band!  But enough about me, let’s get to the questions.

Spike, how the hell are you?  What’s happening with the band?  I believe you guys are back in the studio recording again.
I am well, thanks…  Busking with Uke-Hunt, recording a new Re-Volts record, and slinging pizzas for the man.  Did I forget to mention the Gimmes are well into the process of tracking a new record?  I don’t wanna spoil the surprise but as far as the theme goes, suffice it to say there’s one in all of us. 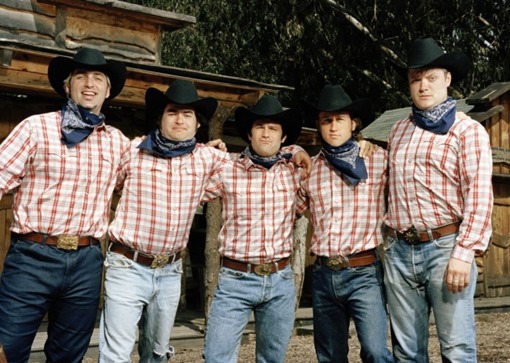 Our readers are an educated lot, really they are, but some of them may not have heard of Me First and the Gimme Gimmes.  How did the band come about?
Back in ’96 Joey and Mike observed that the best songs on most current “punk” records were generally covers and, after approaching Dave, Chris and myself, endeavoured to cut to the chase, so to speak.  Cynical perhaps, but basically effective.

From country to opera and on to singing in Japanese, who comes up with the idea for the albums? Can we expect an Irish traditional album any time soon??? I can already hear you singing Rocky Road to Dublin!
Mike is our theme-man, and I’d say the chances of him suggesting a traditional Irish record are slim to excellent.

I was in Japan recently and played some tracks from Sing in Japanese to some of the locals, I got some very strange looks, but they said your Japanese was fine. Now, I tried my hand at speaking Japanese over there and got now where, how did you manage a full album of it??
If nothing else, I have an aptitude for mimicry (mockery?) which helps get me out of (and in to) awkward situations.

Once the new album is released, will you be touring it? If so, will you be popping over to Ireland for a gig or two?
I sincerely hope so.

Outside of the Gimmes, have you and the other guys got any interesting projects lined up? Does having other projects help keep the Gimmes fresh?
I have been collaborating with my friend Jack from One Man Army and the Swingin’ Utters on a project called Re-Volts for a few years now, and we are now in the process of tracking an eight-song EP (ideally a 10″). I’ve also been going out busking locally with a uke-covers band called Uke-Hunt, and we should have a release on Fat by the end of the year. It all feeds form and discipline.

Obviously you guys are considered elder statesmen in the Punk world, are there young and up and coming bands who you look at and think “fuck me, they’re good!”
Shannon and the Clams,  Parquet Courts,  Eddy Current Suppression Ring,  Viva l’American Death Ray Music,  Cheap Time and Lady (look up ‘Twerk It‘ on YouTube)…  I mostly listen to older stuff, though.

And just like that, we are finished!  Spike, good luck with the new album and many thanks for doing the interview.  We all appreciate it here at CHUNK.ie and we know that our readers will to!

If you want to keep up to date on the band, check out their page over on the Fat Wreck Chords site, or follow Fat Mike and Joey Cape on Twitter.
Oh and finally, many thanks to the lovely Vanessa at Fat Wreck Chords for making this possible!