Welcome to CHUNK.ie Sensorites, how the hell are you?  Enjoying the hot balmy summer days with a nice cool pint of cider??
Kind of, we’re currently locked in the bat cave (our studio down by the docks), and will be until the album is finished. There’s no natural light in the bat cave, it stops the sun from teasing us, our studio tans are coming on a treat! Needless to say bursts of daylight exposure are met with squinty eyes and a slight sizzling of the skin.* 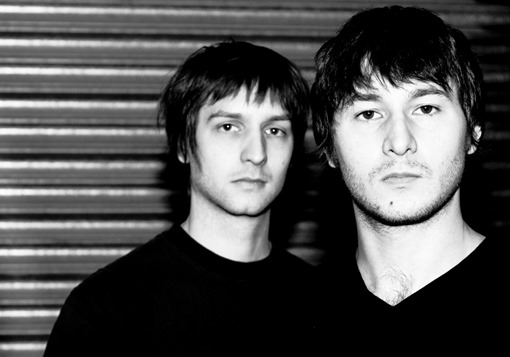 You hail from Liverpool, that much I know, but can you tell us a bit more about the band?
We all live in Liverpool, but aren’t born and bred scousers.  My brother Gareth Kirkham (Bass/Vocals) and I (Natham Kirkham: Vocals/Guitar) hail from Stoke-on-Trent.  We migrated to Liverpool years ago in search of richer musical pastures. Alan Falcon (Drums) is originally from…. drum roll please….. Wing, Leighton Buzzard.  Much to our amusement that’s his real name and address!

Congratulations on the new single Fool, it’s a great summer tune.  It’s challenging Blurred Lines and Get Lucky for airplay in the car at the moment!  So… Which one of you is it based on?
That’ll be me, for better or for worse, it’s pretty much blow for blow account.

The name of the band is interesting. The sci-fi fans out there will know it relates to Dr. Who, but I had to Google it to find that out. I’ll be honest, I only really got in to it when Billie Piper got involved. Can’t imagine why… Anyway, I digress, Sensorites, who came up with the name?
That’ll be me again.  I’ve heard some interesting pronunciations of it as well.  Cleaning out the cellar I found some old dusty Doctor Who books. “Sensorites” caught my eye.

Every interview must have its influences question, so this is yours. Who are they? Personally I’m hearing a bit of the La’s mixed with Billy Bragg, though I am probably a million miles off!
Love the La’s, love Billy Bragg.  Our taste is very eclectic and hence our influences. I’ve a real taste for Delta blues although it’s not overwhelmingly apparent when you listen to our music.  I let the songs take me where they want to go, it’d spoil the fun if i knew how they’d turn out before I started!

I love the idea of the remixes on the singles, particularly Slipstream.  Whose idea was it to go down the remix route?  Do you guys secretly harbour dreams of headlining at Creamfields?
We release acapella and instrumental mixes with with every single so people can remix or mash up.  We’re emailed remixes from people we’ve never met.  That’s how we met Muz, his remixes have featured on the last three singles, sometimes receiving better reviews.  We were surprised to discover that BBC’s dragons den used the instrumental mix of fool as a bed for their Christmas show, that’s when you know you’ve hit the big time!  It’d be really cool to do a club set, the thing about good songs is they can be played in any genre on any instrument/s and shine.

Speaking of gigs, will you be appearing this side of the Irish Sea any time soon?
We’d love to! If you book us we will come!

Hollowhole Records is your own label. Did you go down that route out of necessity or did you feel that it would give you complete control over your own music?  Are there plans to sign more acts to the label?
We started the label so we could release our music.  We’re open to signing to another label, it’s just got to be the right deal!  We plan to release other artists, they just need the magic combo of talent and dedication, the two attributes don’t come hand in hand often enough!

Some light hearted questions now just to finish up with.
Obviously, since you guys live in Liverpool, I have to ask the question.  Who will finish higher in the Premiership next season, Liverpool or Everton?
Despite living on Goodison Road for five years I don’t follow a team, I follow England for a biannual disappointment. I’d rather spend my time on music, there’s not enough hours in the day as it is.

If you could get rid of one preconceived misconception about Liverpudlians, what would it be and why?
That they’re all robbers.

If I was to browse through your music collection, what would I be most shocked to find?
You might be surprised to find a load of hip hop. If you’re after more guilty pleasures there’s a Best of Abba in there too, I can’t remember the last time it was played though.

If you could be any other musician, just for one day, who would it be?
Robert Johnson, the day he sold his soul to the devil.

And there you have it dear reader, our first interview with Sensorites.  When these guys make it big, just remember where you heard about them first!